These are 10 dumbest resume and interview blunders as shared by Annie Fisher.

Having trouble finding a new job? Cheer up. When it comes to resumes, a new survey reveals just how clueless some of your competition is.

You’ve worked hard on your resume, trying to squeeze all your experience in and make yourself stand out from the crowd, and chances are you’ve done a pretty good job. But even if your resume isn’t perfect, it’s unlikely to include any real howlers.

Not everybody can say that. Job site CareerBuilders.com recently asked pollsters Harris Interactive to survey hiring managers and find out the wackiest resume items they’ve seen lately. Out of 2,627 responses, here are the top ten:

1. … attached a letter from her mother.

3. … explained a three-month gap in employment by saying that he was getting over the death of his cat.

4. … specified that his availability to work Fridays, Saturdays, or Sundays is limited because the weekends are “drinking time.”

5. … included a picture of herself in a cheerleading uniform.

6. … drew a picture of a car on the outside of the envelope and said the car would be a gift to the hiring manager.

7. … listed hobbies that included sitting on a levee at night watching alligators.

8. … mentioned the fact that her sister had once won a strawberry-eating contest.

10. … explained an arrest record by stating, “We stole a pig, but it was a really small pig.”

Anne Fisher has been writing “Ask Annie,” a column on careers, for Fortune since 1996, helping readers navigate booms, recessions, changing industries, and changing ideas about what’s appropriate in the workplace (and beyond). Anne is the author of two books, Wall Street Women (Knopf, 1990) and If My Career’s on the Fast Track, Where Do I Get a Road Map? (William Morrow, 2001).

Don’t bring mom to the job interview, warns Fortune’s Anne Fisher. Here are some of the goofiest things job seekers have done when meeting hiring managers.

Even in a relatively strong job market, it can be tough to make yourself stand out from the competition. So it seems some job hunters these days are resorting to, um, innovative (or is that desperate?) ways of making sure their interviews are unique and memorable.

In a poll of hiring managers a few weeks ago, Accountemps (www.accountemps.com), a worldwide accounting-and-finance staffing firm based in Menlo Park, Calif., asked them, “What is the wackiest or most unusual pitch you’ve heard from a job seeker about why he or she should get the job?”

Here are the top ten:

1. “…told me to hire him because he was allergic to unemployment.”

2. “… said that we should hire him because he would make a great addition to our softball team.” 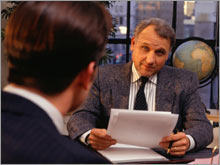 3. “…said he should get the job because he had already applied three times and he felt that it was now his turn to be hired.”

4. “…said we had nice benefits, which was good because he was going to have to take a lot of leave in the coming year.”

5. “… drafted a press release announcing that we had hired him.”

6. “… explained that he had no relevant experience for the job he was interviewing for, but his friend did.”

7. “… delivered his entire cover letter in the form of a rap song.”

9. “…brought his mother to the interview and let her do all the talking.”

10. “…when our company moved to Texas, gave us his resume in a ten-gallon hat.”

What’s the biggest mistake you ever seen someone make – or (gulp) maybe even made yourself – in a job interview? Post your thoughts here or on the Ask Annie blog!